KAKA SAYS NO TO THE THEATRE OF SCREAMS?! 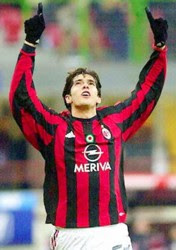 Just because some Rich Arab needed to turn a randomly-picked Premier League team into a branding name doesn't mean a whole lot, if you study your history. When Kaka refused to sign with Manchester City last week, it sent an earthquake throughout the footballing world (everywhere save North America, Cuba, Puerto Rico and the Dominican Republic at any rate)! Why? Well, because Mammon is our God, dude! Could this signal the rise of altruism in football? Hmmm! Doubtful.

Not only is the effervescent Brazilian rich and subtly brilliant on the pitch, he is also a practicing 'Christian' and loyal to his club in a sweet, old-school sort of way.  All he really wants, the brilliant young master repeatedly insists, is to earn enough money to build the world's greatest church for his home city of Sao Paolo. Sheikh Mansour of Abu Dhabi, Shitty's brand-new owner, who is, I see in the Observer, the fifth richest man in the world, had offered, depending which newspaper gossip you believe, between 110M and 300M in Pounds Sterling to Kaka's club, A.C. Milan and wages of a half a million pounds per week to buy him. A.C. Milan, who are owned by the Italian Prime Minister and media baron Silvio Berlusconi, who is approximately the world's 32nd richest man, accepted this bid. No wonder, as his team is filled with aging dinosaurs like Luigi Maldini, 41, Pippo Inzhagi, 34, Genarro Gatusso, 32, Emerson, 34, Nelson Dida, 32, and many others who are long past their best. It's enough money to help completely rebuild the squad. Unfortunately, Kaka ain't no kaka to the club's fans. In fact, 250,000 fans showed up to demonstrate against the transfer outside the San Siro stadium before a game with Lecce. After the match, Kaka wept like Sophie having her son taken at Auschwitz and refused the the traditional swapping of team shirts with the opposition. 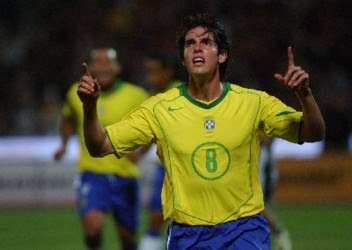 Kaka
Over the first twenty games of this season, City have been ordinary. Robinho has scored 11 goals, but his only consistently competent colleagues, Elano and Stephen Ireland, have had to play with a squad of burned-out veterans, lazy mercenaries and plain-old bad buys. This group was not all put together by Hughes, to be sure, but the nose Sparky showed for quality, low-cost players at Blackburn, has deserted him now that his wallet is thicker. 15M for a hapless beanpole of a Brazilian striker, Jo; 12M for the 'potentially brilliant' Vincent Kompany, who has been played out of position in the midfield; 8M for the laconic Israeli centre-back, Tal Ben-Haim, who has never recaptured the form he showed at Bolton two seasons ago; 6M each for the erratic Benjani and Felipe Calcedo, each of whom looks like they would be superstars in the Finnish Premier League. The last batch, bought to service Robinho, as I said earlier, have upped the expense ante. De Jong, a hard-tackling, post-to-post midfielder cost  20M. This move should at least free up Vincent Kompany so that he can help out the slow-witted, slow-footed Richard Dunne at Centre Back. Pablo Zabaleta might work out at right back at 7M, but someone has to slot in behind him when he executes his attacks down the right wing and 'forgets' to haul his arse back in any kind of urgent way. Wayne Bridge is certainly better at left back than the thuggish Michael Ball, but 18M is surely three times what he's actually worth at 31-years-old. Hughes' biggest gamble is the 18M spent on the irritable, albeit sometimes brillant presence of Craig Bellamy. As with Bridge, Hughes has definitely paid three times more than his actual market value. The point, I guess, is for the ebullient, ultra-physical tattooed Welsh warrior to act as a ra-ra team leader and plunge his boot up the posterior of the lackaidazical, but also brilliant Robinho. This tactic was already attemped by Real Madrid's old coach, Bernd Schuster, when he sic'd Ruud Van Nistelrooy and Raul on him to 'toughen him up!' It didn't work. Robinho went on  boozy walkabout, screamed to get out. Thus Real sold Robinho to City, where he carries on in the same manic-depressive fashion, and fired Schuster.
As I write, Robinho has just returned to the club from his home in Brazil, and will receive a fine of app. 300, o00 for leaving the club's training cap in Tenerife without seeking the club's permission,. He has also been questioned by police about a possible nightclub rape. Having turned down a move to second-place Chelsea, where he would have had the chance of a fine run in the European Champions Cup and only slightly less money, Robinho already wants out. Sparky may get along well with the volatile Craig Bellamy, but he's had no luck with the Brazilian lads. Jo, Elano and Robinho. If he can't kiss and make up with Robinho, who wants more of his Brazilian compatriots on the City squad, not less. I expect he will be gone by June.
My stern old Grandmother brought me up well and was never shy about her use of clichés. Be careful what you wish for... was one of her favourites.  There's supposed to be a fairy tale at the end of a sad historical story. Ideally, in this one, a fine Arab prince would ride in on his steed and rescue Manchester Shitty's  army of defeated, humiliated fans from being the butt of a million bad jokes and the sarcastic nods and winks of their rival fans at Manchester United and Liverpool. Improvement may soon be gradually forthcoming, but the winning of any kind of championship is more than a few seasons away. Messrs. Robinho and Hughes will surely both be long gone and our old object of desire, Mr. Kaka, will surely have won three or four more championship medals for A.C. Milan and built the world's biggest church back in Sao Paolo.
*Proddy Dog aka Protestant
Posted by Ivor Irwin at 8:44 PM
Labels: Football