Grandpa Robben Finally Gets it Together! 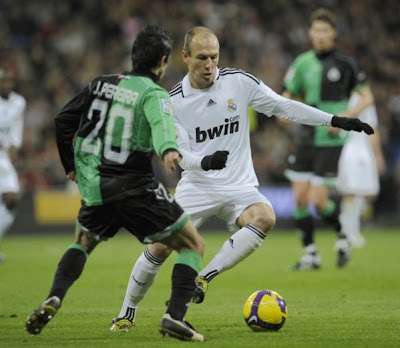 “Grandpa got it up!” is how my crazy Madrideño friend, Dagoberto put it in an email. The mean-spirited pundits at Marca, La Vanguardía and Ultíma Hora, who have been tearing the reputation of Arjen Robben to pieces for the better part of two seasons, have had to change their tactics, too. Injured more often than fit, Robben would have to bear the insulting chant of “¡Malcreado!” whenever he did play. Whether he was wincing after being substituted, sitting on the bench with a sour disposition on his elderly gentleman’s face, or sitting in the rich fan’s seats in an expensive Saville Row suit wearing the Grinchean mien of an infant with no toys, Arjen Robben has been belittled too often, for too long. Of course, 36 million euros is a lot of dosh. Actually, it’s the fifth highest transfer fee paid in Real Madrid's history, behind only the four, world-famous Galacticos Figo, Zinedine Zidane, the Brazilian Ronaldo and David Beckham. There has never been any doubt about the lad’s talent, but, finally, having been injury-free for half a season. Robben is finally showing that he is the best left winger in the world.

Arjen Robben just isn’t worth it. Nobody seems to have taken the lad seriously since he signed with F.C. Groningen in 2001. Already balding at the age of fifteen and carefully watched over by his baritone-voiced, humourless father, Hans Robben, besieged by agents, the two Robbens decided to keep his business in the family. Depending upon whom you’re discussing his career with, Arjen Robben has been either ill-served by his dad or the man is the best agent in the world. Hans Robben was certainly a figure of disdain for PSV Eindhoven’s owner Harry Van Riijn, but he still signed the boy anyway.

Van Riijn desperately wanted Robben at PSV. Anything to keep him out of the clutches of Feyenoord or Ajax Amsterdam. Hans presented Van Riijn with a list of demands for performance-based bonuses that rivalled anything requested by his senior players. Although Van Riijn did a lot of complaining to the Dutch media about Arjen’s old man, he coughed up the cash anyway. He isn't worth it , was the consensus amongst the old-school Dutch journos at the time after seeing his skinny legs and narrow chest, but Robben soon changed their minds with his breathtaking runs down the left wing and an awesome ability to ride the most ruthless of Eredvisie tacklers. A finicky eater, absolutely unwilling to submit to the healthy dietary demands of the club’s coaches and dieticians, Robben did it his way.

"Robben just isn’t worth it!" Sir Alex Ferguson was the next football overlord to announce it. Manchester United were scouring Europe, looking for another brilliant young winger, to take the pressure off Cristiano Ronaldo. United's initial €7m offer was about to be accepted by Van Riijn when Hans, depending upon whose story you believe, decided to make a call to Peter Kenyon or vice versa. Kenyon, originally the bag man for Manchester United, had already established a relationship with Hans, so that when he moved to Chelsea, he took his ready-made connections with him. Chelsea happily wrote a check worth €18m for the brilliant PSV prospect . It was the first salvo in the ongoing conflict between Manny U and Chelsea. Ferguson may have not believed the 'Flying Dutchman' was worth it, but he took the Premier League by storm in his first season. Their manager, Jose Mourinho, looked like a genius for buying Robben and Damian Duffy from Blackburn Rovers at prices that left the other teams in the EPL gobsmacked but which gave the team instantaneous success in his first season. Chelsea won the Premiership in Mourinho’s first two seasons and Robben rode the tide along with him, becoming a superstar. Unfortunately, it was in only in his second season that Robben’s impact was curtailed due to a string of injuries. 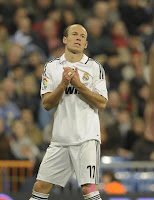 Football is a ruthless business. Certain players who were very slight in their teenage years, like Michael Owen, Louis Saha, Lionel Messi and Arjen Robben, seem, years later, to be suffering from an endless cycle of injury and recovery. In the case of these four, there can be no doubt that they’ve spent more time recovering from injury than actually playing. A really good clue as to the causes of these injuries first came from Lionel Messi ‘s family in an interview with the Buenos Aíres newspaper, Diario Perfil. in 2007. Lionel, who had been born premature, was so tiny when Barcelona signed him as a ten-year-old youth prospect, that the club’s doctors recommended he be given doses of Human Growth Hormones and steroids. Consequently, the endless cycle of injury and recovery that has dogged Messi ever since has made him the poster boy for the side- effects involved in making athletes play guinea pig for rich football clubs and their doctors. I have absolutely no evidence of this, but it takes no major leap of the imagination to believe that Michael Owen and Arjen Robben may have also been ill-used by both their advisors and their clubs and let themselves to be experimented upon.

Atany rate, Mourinho put up very few objections when Real Madrid came calling and offered to double Chelsea’s money. Robben was brilliant, but he had made just 67 appearances in three seasons. The club had already bought Florent Malouda and, so, when Robben’s father dared to discuss a renegotiation of Robben’s contract, Kenyon and Mourinho finally lost any vestige of patience with him. At the same time, to Ramon Calderon, the Real Madrid President, Arjen Robben was the only player available from his infamous superstar shortlist containing the likes of Ronaldinho, the Portuguese Ronaldo, Kaka and Cesc Fabregas that he had used as part of his campaign to get into office the previous summer.

Robben played a minimal role in his first season with los Blancos, although he did well in the final six games of the Liga-winning season , scoring three spectacular goals. Real Madrid, ordinarily the most impatient club on the planet, with a mythic intolerance for even the slightest failure, were very mature, for a change. Back in his hometown of Bedum, Robben was introduced to a Chinese acupuncturist, who helped cure his various leg and back ailments and managed to persuade him to alter his diet and training regime. Finally, Robben’s infamous morning,noon and night ‘diet’ of french fries smothered in lemon mayonnaise, chocolate milk shakes and buttered bread and kebobs was abandoned for fruit and grains.

This season Robben has been brilliant. His legs are now muscular tree trunks. His chest noticeably expanded. He is 25 now and each recent performance seems to supersede its predecessor. Unfortunately, the Madrid press, which used to refer to him as El Malcreado (“The moaning malingerer”) now refers to him as Señor Codicioso (Mr.Greedy) because he keeps possession of the ball and rarely passes. They savage him mercilessly. Yet, for the first time since his academy years, Robben is scoring a lot of goals. Unfortunately, those moments of crowd-pleasing trickery are ruined by alternate moments of shocking naïvete and kindergarden-level decision-making.
The journalistic wolfpack call him selfish, but I genuinely think that the lad is not the brightest spoon in the cutlery drawer and is simply bereft of some of the fundamentals of decision-making that come easily to his brilliant contemporaries, Lionel Messi and Kaka. Simply put, Robben owns little footballing top level football experience at the highest level. So far in his career, he has never played a full season. He looks mature, in fact Robben really looks a worried forty, but seems to not have the foggiest when it comes to choosing the right moment to pass to Ruud Van Nistelrooy, Higuain, Raul, or the new kid in town, Huntelaar. Thus, it’s not hubris that makes him hold on to the ball, but cluelesness. One shouldn’t overgild the lily, however. The best wingers like Garrincha, Georgie Best, Ryan Giggs, Jimmy Johnstone, Jairzinho, Liam Brady and Real’s own Francisco Gento, all held on to the ball for too long and gave their coaches ulcers.

If you’ve been watching Real Madrid’s La Liga matches this season you’ve seen a vast improvement in his overall play. His team-mates, especially the likes of Gutí, Sneijder and Heinze, are equally to blame for Robben’s onfield indiscretions because they are repeatedly trying to find him with their every attacking move. His decision-making and distribution may indeed be questionable, but he has, nevertheless, been responsible, whether through assists or actually scoring, for 13 of Real’s last 21 goals.

The club’s previous coach, Bernd Schuster, was obsessed with having the left-footed player cause mayhem on the right hand side. The new coach, Juandé Ramos, seems to have recognized the telegraphed predictability of this sort of orthodox methodology and uses Robben on the left side more often. Lionel Messi’s season has so far made him the most dominant footballer in the world, but Robben is running a close second to the tiny Argentine. The €36m spent on Arjen Robben, especially considering the ridiculous bid of €200m offered by Manchester City for Kaka, looks like a bargain.
Posted by Ivor Irwin at 7:14 PM
Labels: Football