Miguel Cotto Gets His Respect Back: Jennings Out of His League

February 21, 2009
Guts is sometimes just not enough. Preston's own Michael Jennings is a brave lad with a lot of bottle; unfortunately, he just wasn’t endowed with enough ring craft to prevent Miguel Cotto from regaining the World Welterweight title at Madison Square Garden on Saturday night. At 31, having avoided a fight with Cotto for close to two years, Jennings may keep boxing, but surely this was his last hurrah with the big boys. 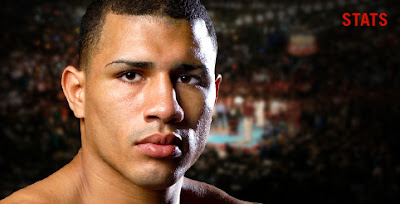 The affable veteran Welsh coach Brian Hughes and a vast supportive apparatus of investors, trainers and hangers-on have always kept Jennings tightly wrapped in cotton-wool, somehow managing to keep the cash register ringing without ever going for the gusto against experienced, highly rated pros. Tonight, however, Michael Jennings’ chickens came home to roost. A former British Welterweight champion, Jennings, now 34-2 (16 KOs), in his first fight ever outside the UK, was not even close to a match for the immaculate Puerto Rican, Miguel Cotto. The sleek Cotto, in his first match since being stopped by Antonio Margarito in the 11th round of a brutal nail-biter last July, was ready.

Puerto Ricans tend to use a lot of hyperbole. Miguel Cotto, the kid from Cagüas, a star at the Bairoa Gym since he was six-years-old is, I’m told, the greatest pound-for-pound fighter from La Isla since: a) Felix ‘Tito’ Trinidad, 2) Hector ‘Macho’ Camacho, or, 3) Wilfredo Benitez. My mother-in-law, Marina, who’s from Juncos, loves Tito forever for raining on glamor boy Oscar De LaHoya’s parade. I love defensive skills, so I tend to go for Wilfredo because he was the best slipper of punches I ever saw.

Anyway, Miguel Cotto is no longer on the outside looking in. He is behind the door and he has a vice grip on the handle. A silver medalist at the 2000 Olympics, Cotto turned pro in 2001 and on September 11, 2004, out pointed Kelson Pinto to win the WBO Junior Welterweight Championship. Suffering to maintain a low weight after six knockout wins, he vacated that title and moved up to the Welterweight division. After stopping Carlos Quintana to win the WBA Welterweight crown, Cotto successfully defended against what the legendary coach Angelo Dundee has hyperbolized as being the ‘greatest generation’ of Welterweights ever, stopping Quintana, Oktay Urkel, Zab Judah, the brilliant Shane Mosley, and Alonso Goméz.

His only loss, to Antonio Margarito, turned out to be a fiasco after the fact, as Margarito was caught using doctored hand-wraps (what Ring magazine referred to as “an illegal plaster-like substance") under his gloves before his first defense of the title against Shane Mosley. Suspended from boxing for at least a year, the now infamous Margarito will surely be subject to strict supervision and many difficulties before he gets to box again. Thus, tonight, Cotto stepped into the ring ready to unite the WBA and WBO titles.

Jennings entered the ring first, bouncing up and down to the Sex Pistols’ punk anthem 'Anarchy in the UK.' Jennings, used to a traveling army of 2,000 English loyalist fans accompanying him, wherever he fights in England, walked into a chorus of boos from a partisan pro-Cotto, mostly Puerto Rican crowd of 9,000. The English contingent were not shy about singing their bawdy songs, but Los Boricuas were not to be outdone. This was the best atmosphere I’ve seen at Madison Square Garden in at least twenty years.

The opening round was a tit for tat affair. Jennings worked hard at keeping a safe distance while Cotto dance-stepped around the center of the ring, taking his measure. Jennings threw very few clean punches, five jabs at most, but Cotto’s was the first telling blow, his short left upper cut catching the Englishman on the chin midway through round two. With 30 seconds to go in the same round, Cotto launched a furious barrage which forced Jennings on to the ropes, although the Englishman managed to tie him up inside for the last 10 seconds. Jennings continued to attack in the third round, throwing out jab after jab, although very few landed cleanly. Cotto, cocked and continually crouched down low, waited to pounce at opportune moments, landing a lot of tight, short body shots.

The left hook Jennings caught at the start of the fourth proved to be the beginning of the end. By the middle of the round, Jennings started to bruise. Cotto pummeled him back into his corner with a left hook and then, after throwing a string of unchallenged one-twos, put Jennings down for the first time with another crunching left hand body shot.

The 31-year-old took the full count before springing back up, but , after retreating across the ring, he was quickly downed again in the opposite corner, the victim of yet another sweeping Cotto left hook to the body.

Jennings barely survived the round, but it was pretty comical to see Cotto jumping up and down in his corner thinking the contest was already over. Luckily, his trainer pushed his mouthpiece back in before Cotto managed to spit it out. When the bell for the fifth rang, Cotto flew out of his corner in panther fashion. A left jab rocked Jennings' head back. Still up for it, Jennings’ John Bull bottle overcame common sense as he anemically tried to match Cotto’s punches. Then Cotto exploded, all action as he sent Jennings careering into the ropes with a wicked right to the head, followed by an equally awesome left uppercat.

One last booming bazooka of a right to the Brit’s head ended it as Jennings went down on his knee again. Jennings’ glazed eyes made contact with his trainer, Brian Hughes, who was having none of it. Hughes wind-milled his arms, trying to will the groggy Englishman to stand up. And Jennings did indeed stagger, rubber-legged, into a standing position but the referee, Benji Estevez, had seen enough damage done after three knockdowns to call the fight off.

"Cotto's a bloody great fighter," Jennings said after the fight. "The hardest puncher I’ve faced. He was very deceiving. You think you're out of his range but then he strikes. I thought I had distance from his firepower."

A deliriously happy Cotto, delighted at his truncated night's work, felt vindicated after suffering from his only pro defeat to Margarito. “Getting back into the ring and being able to study my opponent for the first couple of rounds tonight was great," Cotto said. "I started to go to the body and then the head. Third round I let my hands go and I just threw my punches."

"Cotto's the complete fighter in every sense of the word," Coach Hughes told me, all breathless with admiration after the fight. "Cotto really put the ring down on Michael. He's such a great fighter.”

Later, Jennings announced at the press conference that he was going to urge Hughes to get him a rematch. This would be foolish. I like all those Brit gangster movies like Layer Cake and Sexy Beast. Jennings looks like he'd make an excellent bodyguard for some cinema gangster. I think he should take acting lessons because, on tonight's evidence, he really ought to retire.
Posted by Ivor Irwin at 4:53 PM
Labels: Boxing