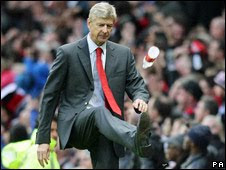 Many of you don’t like Arséne Wenger. Being the big-hearted, forbearing person that I am, and admiring his dexterity with the English language, which is far superior to my own, although I can’t say I ‘like’ him, I can definitely say I admire Wenger's gift for making Arsenal into the greatest Selling Club in the world. There’s that and his rigid adherence to a fast, pretty, short-passing mechanized style of play that reminds everybody of the style he taught the guys who make FIFA Soccer for PlayStation and XBox360. Until Arséne, the notion of ‘walking the ball into the net’ was a joke. Now it’s taken seriously. No one can walk the ball into the net with the same willful panache as Arséne’s Arsenal artistes.

Fluent in five languages, Wenger is a man who insists he has "no other hobbies." Perhaps a vacation may be due. During the two press conferences before the game on Saturday, August 29 against Manchester United, the Arsenal boss twice alluded to a E.U.F.A. 'Witch-hunt' after his striker, Eduardo, was charged with diving during a Champions League victory over Glasgow Celtic and was, subsequently, suspended from two E.C.C. games.

"I find it a complete disgrace and unacceptable," the Alsatian barked. "It singles out a player to be a cheat and that is not acceptable. I believe you can debate whether it is a penalty or not, but this charge implies there was intent and a desire to cheat the referee. Having seen the pictures again, nothing is conclusive. It is a Witch-hunt."

By 'pictures', I believe Wenger means that he looked again and again at the same video most of the rest of us saw. If Eduardo, who made no contact with any other player before throwing himself to the ground as if a bullet had felled him, was moved by some divine force of nature, only his coach knows exactly where this force comes from. One is certainly left bamboozled enough by what Wenger actually saw to wonder if the F.A. might, instead of insulting Wenger with the aforementioned suggestion that he ought to take a break, simply send him on a trip to the optometrist's office.

Beaten on Saturday by a disappointingly anemic Manchester United side, despite the predictions of a preponderance of opinion among the pundits, ex-players and the press, Wenger was too big a man to claim that the linesman was wrong when he called Robin Van Persie’s last second goal offside. Instead, Arséne went on a rant about Manchester United playing 'anti-football.' Wenger also babbled out various bellicose insults in the direction of referee Mike Dean for letting United "repeatedly foul" his side.

"I have seen a player make 20 fouls without getting a yellow card. You don't need me to tell you who, but their player gets away without a yellow card. It's quite amazing," stormed Wenger. When someone in the press corps mentioned that his players had received six yellow cards of their own versus United's three, Wenger moved on to a new questioner. In truth, it's the usual case of Wengeresque deja vu again. Indeed, after a very similar 2-0 defeat at Old Trafford in 2004, his players having been issued nine yellow cards and an F.A. fine, Wenger's only defense was to attack the referee and to try to steer the discussion in a new direction. Martin Samuel and Kevin McKenna, two of Britain's more conscientious football reporters persisted with their questioning about the Gooners' predilection for petty fouls, but, in each stated example, Wenger insisted he hadn't seen any of them. Not a one.

"How is it you expect me to comment on something I clearly did not see," he insisted with a Gallic shrug

Darren Fletcher's "20 fouls" having gone unpunished, Wenger used this excuse of "persistent fouls" against his pure, naïve charges to twist the argument around toward the new subject of diving. This after E.U.F.A.'s decision to ban his star striker Eduardo from two games after he was caught diving and then simulating an injury by the referee in a Champions League win over Glasgow Celtic on the previous Wednesday. Indeed, another Arsenal player, Emmanuel Eboue, was cautioned for diving against United, although, obviously, it goes without saying that Wenger insisted he had not seen it. Both United and Celtic, Wenger repeated, "directly targeted my players."

To be sure, Michael Carrick and Darren Fletcher were tackling Denilson, Eboue and Sagna hard and conceded a number of dangerous free kicks. These fouls were witnessed by Wenger. "I don't know (why they went unpunished). You should ask the referees. I don't know." To an unbiased eye, this kind of hard-tackling, no-quarter football is what the game is really all about. To Wenger, however, his macular faculties constantly being, as we say in England, "on the blink," contact in general and tackles against his players in particular, must genuinely seem crude and brutal.

For fairness' sake, I tried to find an entry on 'temporary blindness' in both the Yahoo Health Encyclopedia and on the web site of the American Optometric association. There was nothing. Anyone with vision worse than 20/200 which cannot be corrected with corrective lenses can be considered legally blind.

According to the A.O.A. "A legally blind person with vision of 20/200 has to be as close as 20 feet to identify objects that people with normal vision can spot from 200 feet. So a legally blind person needs a distance of two feet to spot the letters on a standard eye chart that is 20 feet away. Legal blindness is very common in older people because eyesight tends to worsen with time and age. Approximately 135 out of every 1,000 people over the age of 65 are considered legally blind. Only about 10% of legally blind people read Braille. A much smaller percentage use white canes or guide dogs."

Many of you will insist that I am biased or insane, but I honestly believe that Arséne Wenger is a macular degenerate. It's quite logical to believe that he's legally blind, or, at best for him, although not necessarily our beloved game, often—very often! —temporarily blind.
Posted by Ivor Irwin at 5:42 PM
Labels: Football