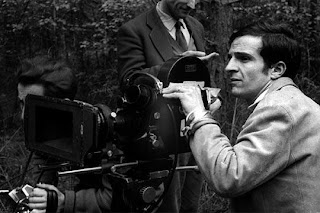 The 400 Blows (1959) is absolutely one of the most moving experiences in beautiful storytelling I've ever had. It's the very touching story of a wide-eyed adolescent, very much inspired by the Writer/Director Francois Truffaut's own early life. His alter-ego, Antoine Doinel (Jean-Pierre Leaud), is an aggressive, brave boy growing up on the mean streets of Paris, already committed, he insists, to a life of petty thievery. The merciless adult world refuses to see him as anything but a disrespectful troublemaker. Yet as 'street' as the boy is determined to be, there another tender, intellectual side he sparingly shows, exemplified in a scene where Antoine lights a candle before a shrine to the writer, Honore De Balzac, in his bedroom. A rebel with a cause, Antoine learns as he goes along, so that, by the time the film's famous final shot, an achingly slow zoom leading to a freeze frame, shows him looking directly into the camera at the seaside. Finally aware of his surroundings and circumstances simultaneously, having just escaped from a boys' house of detention, Antoine stands on the beach, trapped between land and water, his past and his future.

Antoine is fully realized by Jean-Pierre Leaud, a splendid young actor who exhibits a kind of pure solemn detachment. Already bitter about events which have taken place long before the film's plot began, Antoine is vigilant about harnessing his emotions and contemptuous toward a hypocritical adult world. The actor and his performance meet seamlessly at Truffaut’s behest. Not surprisingly, this movie was the first in a long collaboration between actor and director. They would later return to the character in the short film Antoine and Collette (1962) and three more features: Stolen Kisses (1968), the wonderful Bed and Board1970) and Love on the Run (1979).

All five are truly great works of art, particularly Bed and Board, but The 400 Blows really is Truffaut at play in a class all by himself. Truffaut's first feature is the original film of the French New Wave. Dedicated to Andre Bazin, an important French film critic, it's a sort of poem from the fatherless Truffaut to a man who steered him away from trouble.

There is nothing gratuitous in this film. No fat. None whatsoever! Everything builds incrementally to the impact of that final shot. We first meet Antoine when he is living with his mother and stepfather in a tiny crowded flat where everybody bumps into each other. Antoine's sluttish mother (Claire Maurier) is a bottled blonde who favors tight sweaters and relentlessly nags about having no money to her miserable son and his stepfather. The stepfather (Albert Remy) is actually pretty easy-going. He is not nasty to the boy, or mean-spirited like the mother, but is clearly not emotionally available either. Both parents are away most of the time, neither one paying any kind of close attention to the boy. Basically, Antoine is ignored. He might as well be an object, like a vase or a carpet, for all the attention they pay him. Worse, they judge him harshly trusting in the self-interested based foibles of other vindictive people.

Atypically, in school Antoine has been written off by his teacher (Guy Decombie) as a troublemaker. His mother never even thinks to ask her son his side of the exaggerated tale the teacher tells her about Antoine's bad behavior' at school. Indeed, just like the old blues song says, if Antoine didn't have bad luck, he wouldn't have any at all. So, when a sexy pinup calendar is being passed around the room, he has the bad luck to be the one the teacher catches clutching it. Standing in the corner as punishment, Antoine makes faces for his classmates to giggle at before he desecrates the wall with graffiti. That night, when his homework is interrupted by another one of his mother's hissy fits, the boy uses it as an excuse to skip school the next day. Absent again the next week, Antoine tells his teacher the ridiculous lie that his mother has died. Soon, however, she turns up at school, very much alive, her tightly encumbered breasts pointing at the teacher's lying eyes through her wooly sweater like mocking fingers.  Seething with rage, she urges the teacher to punish the boy. At that point, Antoine becomes an object of contempt for both his teachers and parents.

That night, cramped into the narrow alcove which is his 'bedroom, Antoine writes about "the death of my grandfather'' in a close paraphrase of Balzac, whose writing he has memorized as an act of love. It is, of course, composed by the boy as an act of paraphrased homage, it is blown out of all proportion by his hysterical teacher as an act of deliberate, vindictive plagiarism. Humiliated one time too many, Antoine sets out diligently to become a true bad boy. He and a friend steal a typewriter, but, of course, get caught trying to return it. For this outrageous act Antoine is sent off to a juvenile detention home.

Completely abandoned by his parents, his fate is left to the caprices of the bureaucrats who run the social services. The most awful scene imaginable takes place as we witness his parents disgustedly discussing his case with a social worker. Once again, they might as well be discussing a broken vacuum cleaner or a coat. "If he came home, he would only run away again,'' his mother insists. As a result he is booked at a police station, placed in a cell, and then put in a paddy wagon with pimps, prostitutes and thieves. As the boy is driven through the dark streets of Paris, Antoine's face stares out through the bars like a thousand-year-old martyr. The sadness of his existence as he stares out at a mean old world still never fails to move me no matter how many times I see it.

Please don't misunderstand; Truffaut's film is not altogether dark and miserable. Yes, it's shot in a grainy black-and-white in the midst of the Parisian winter, but there are still episodes of pure joy. One pristinely brilliant scene shows a physical education teacher leading the boys on a jog through Paris. Shot from a distance above them, we see the boys escape two by two, until the teacher has only two or three boys to bark orders at. The one moment of redemption and possibility for the family follows one of Antoine's foolish mistakes. After lighting a candle to Balzac, the boy sets his little cardboard shrine on fire accidentally. Angrily, his parents smother the flames, but then their exasperation dissipates, and the whole family goes to the movies and lends up laughing on the way home.

The cinema gave Francois Truffaut a life. This film, made when he was only 27, clearly marks the dividing point between classic and modern cinema. Truffaut is my beloved when we're talking modern directors. Truffaut (1932-1984) died of a brain tumor at 52. He left behind 21 films. All are good. This one is close to perfect!
Posted by Ivor Irwin at 6:29 PM
Labels: Film Reviews