Rocco and His Brothers


Luchino Visconti's Rocco and His Brothers (1960) is a marvelous cautionary tale about survival in hard times. 50 years old now, it still holds up splendidly. A strange blend of social realism and operatic melodrama, it somehow still works splendidly. Made by a man of deep contrasts, Visconti was from a ridiculously rich noble family with roots going back to Charlemagne, yet still a committed Marxist. One of the Big Three of Italian NeoRealism, along with Roberto Rossellini and Vittorio de Sica, Visconti's work demonstrated a conflict between his Social Realist interests and his experience as a renowned opera director at La Scala, which was steeped in the Western aesthetic tradition. Thus, in Rocco & His Brothers, we have a sort of hysterical hybrid – a black-and-white soap opera with an equal amount of street grit--performed by an ensemble of real and amateur actors. 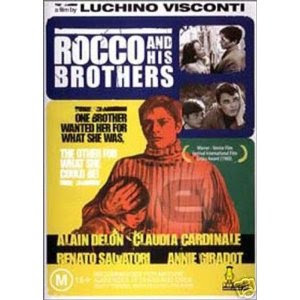 Contradictions are apparent everywhere. The film may not always make narrative sense, but this is the consequence of Visconti as zealot. Dramatizing the social consequences of Italy's internal Diaspora from South to North is no small mission. His contradictory goals are to make one family socially typical, yet also individually compelling. This is clearly not a sexy concept, yet somehow Visconti more or less pulls it off. All of the characters may be 'types,' yet all are given enough individual character touches that they transcend the problem of being contrived and overwrought that dogs so many other Visconti and Rossellini works.

The central conflict of the film is between the saintly Rocco (Alain Delon) and his ruthlessly hedonistic brother Simone (Renato Salvatori) over the love of a beautiful prostitute, Nadia (Annie Girardot). This clichéd love triangle is compelling thanks to the quality and beauty of the performers. Passion burns the candle at both ends, 24 hours a day for this whole mad Sicilian family. Forced by dire poverty to move from the Sicilian countryside to Milan, the Porondis, a widowed mother and her four young sons, join the oldest son, who's already got a steady job and a fiancé in the big city. Rocco, his mother, his brothers, the prostitute: they all begin as "types". Sure, there's a lot of "Mamma mia!" and hands raised to the Lord in despair. Sure, there's a lot of sweaty machismo. The boys spend a lot of time shouting at each other in their singlets. Yet the inescapable fact is that you can forget about the politics and the stereotypes. The Porondis are all very good looking and way cool!

Somehow, unlike his more mechanical attempts at propaganda in The Red Desert and The Damned, Visconti fell in love with his characters. The director lavishes his settings and characters with a pure Dickensian detail. As with his other masterpiece, The Leopard, Visconti shows a brilliant flair for tragedy and earthy good humor. As the inexorable logic of the plot and the fastidious peeling-of-an-onion detail take place, you can throw away all the specious chit-chat about social-realism and propaganda and just love this movie for what it is.

From the moment they arrive in Milan carrying bags of oranges and wax poetic at their first glimpse of snow, we are with the Porondis and aware of their collective naïveté. In no time at all, Simone (Renato Salvatori) becomes a prizefighter, part of a sleazy gangster's stable of broken-nosed, cauliflower-eared stumblebum gladiators. After winning a few fights, the fruits of victory for Simone are the free drinks and meals offered by nightclub owners. Taking up with a prostitute girlfriend, Nadia, (Annie Girardot) doesn't improve matters. Soon, however, Simone introduces them all to the poison of commercialism, corruption and urban brutality. After doing his military service, the saintly Rocco returns home to find no work and is forced to become a boxer, too. A few good paydays foment jealousy as Nadia, trying to 'reform' at the behest of Rocco and his long-suffering mother (Katina Paxinou), sleeps once again with Simone but flirts dangerously with Rocco. In the strongest scene in the film, the vicious Simone rapes the reformed prostitute right before the gentle Rocco's eyes and then slugs it out with him. This scene rings so true, the reality of the triple defilement is so powerful, so saturated with emotion and violent ambivalence that its rawness is shocking. I defy anyone to watch this scene and not be equally moved and exhausted by it. Anyone who thinks Alain Delon was just a blue-eyed, jet-black locked hunk of prettiness needs to see Rocco.

Throughout the film, Visconti swoops with his camera all over the streets of Milan, offering little stares at paving stones, children, people with other stories, and nooks and crannies full of daily grime and grunge. The passionate emotions of the characters and the screeching drama of the characters sting an audience into a state of empathy and wakefulness. It's Douglas Sirk on steroids. All deeply felt by its director and his ensemble.

Nino Rota's beautiful, passionate score is wonderful. Although Rota is best known for his association with Federico Fellini, his work here is clearly among his best.

Clocking in at 168 minutes, this is a demanding film. For anyone who insists the sixties started with the Beatles and La Dolce Vita, I'd suggest that they really need to start here.
Posted by Ivor Irwin at 11:20 PM
Labels: Film Reviews