An Evening With Paul Thorn 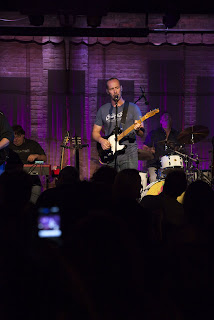 How many rock ‘n’ rollers you know went toe-to-toe with Roberto ‘Manos de piedra’ Duran and didn’t get knocked out? When you go to see Paul Thorn in concert you’re getting something special.  I’ve been going to watch concerts since 1966 and I defy you to name any band on the road, paying its daily dues right now that gives a show as good as the Paul Thorn Band. No ifs, ands or buts!  Caught them June 15 at the Space in Evanston, Illinois and they were awesome.

The word 'showman' may not  mean a lot to you, but to me it’s the ultimate tribute to the live entertainer’s art. I’ve been at great shows where Sarah Vaughan stood there frozen, Dylan mumbled, Miles turned his back on me, Janis Joplin got blitzed onstage and Rory Gallagher off. Stage craft, however, that kind of  “Ladies and Gentlemen, I love you” vibe perpetuated by the likes of James Brown, Jackie Wilson, Elkie Brooks, Ray Baretto, Billy Stewart, Mitch Ryder, the Ike & Tina Turner Revue, Otis Redding with the M.G.s and the Barkays, and, my favorite of all, Little Feat with Lowell George, is very very rare these days, A lot of it, I think is because 'professionalism' is so simple to parodize if it’s done in an insincere cynical manner, Nevertheless, Paul and his band make high art!!!

One thing I’m not going to do is go over his routine. There are plenty of other reviews where you can read the songlist. Suffice to say, he’s funny and dry-witted and relentlessly full of give-and-go and fliratation with his audience. “Getting your money’s-worth” surely is a cliché, but the whole band is the real deal. When they aren’t in one of their cut-away vibes that sound like a power-pop Beatles or Lucinda Williams-ish alt-country’ they are in a consistently Southern-fried synchronized mode. You know, the kind  that the Black Crowes desperately try for, but never quite reach. The very best comparison I can make, because the band is just so-o fucking eclectic, is with Willie Mitchell’s house band at Hi Records featuring the Hodges brothers, They are Jeff Perkins on drums and his partner in synchronicity, Doug Kahan on bass. These two play off each other like they’re caught in a lover’s-lock for lifetime. The keyboard player, Michael ‘Dr. Love’ Graham, is kind of the busy, busy Keith Moon of the 88’s. And then there’s the jaw-dropping, fastidious, poker-faced brilliance of the band’s lead guitarist Bill Hinds. At different moments, I swear to God he was channeling Duane ‘Skydog’ Allman, Lowell George, Ry Cooder, Scotty Moore, James Burton, Roy Buchanan and, beyond that, just a lot of beautiful playing unto himself.

As for Paul Thorn himself, the dude is in shape.  Not 'roidy, but with the body of someone who eats carefully and goes to the gym while on the road. Vanity reigns and Paul, whether he’s playing blues or roots/alt-country is an artist it’s hard to peg. Like many singer-songwriters, even though most folks have never heard of him, he’s had a long career working with the likes of Bonnie Raitt, John Prine, Huey Lewis, Sting and Nashville mainstreamers like Tanya Tucker, Toby Keith and Sawyer Brown: All have covered his songs.  Well, they may  do his songs, but only Paul sounds like Paul. His Mississippi accent oozes with masculinity, sexuality, down-home humor and the attack of a lapsed Pentecostal sex machine. Ah, the old eternal Southern-fried conflict between Man and God, the hard-on and the scriptures. All that ambivalence is couched in so much sincerity and fed to the scores of mature ladies in the audience, who maybe ought to know better but don’t, squealing like horny little platinum-haired pot-bellied pigs at his double entendres and silver-tongued  come-ons (There were even moments where the show reminded me of going to see the likes of  Tom Jones and Lovelace Watkins as a kid with my sluttish Aunty Gina, when she used to take off her knickers, give them a rub down there--you know where--and then throw them at the artist).

There’s nobody like him. He’s out there touring, coast to coast and all over the planet, ten months a year. GO  see the show! 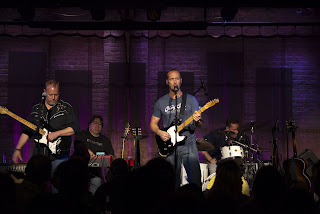 Here’s my Q & A with Paul Thorn. You can’t help but notice that I’m the one who’s running at the mouth.

Q:    I got to be a fan of yours after just hearing one song, “Ain’t Love Strange.” I’m sat in a bar  in Key West with no air-conditioning called the Green Parrot, feeling sorry for myself over a certain girl named Azúcar and I’ve had way too much Maker’s Mark when your song comes on some roots cable station with no D.J.. Band sounds like the fucking Hodges brothers  with Lowell George back from the  dead. And there are like three short-short stories in the song and its sort of like a trilogy of passion movie or a triptych painting. Blew me away. Took me months to hunt you down, Anyway, is there a story about how that one got written? It’s not really typical of your songs which, you know, tend to deal with one subject per song.

A:     Ain’t love strange came into existance when me and my cowriting partner Billy Maddox put a drum machine on and just started making up little mini stories.. It was a fun song to write.

Q:    Your band is really eclectic. I think I heard you say that the band’s been together for 12 years, except for the bass player. There are very few bands that last that long. Like,you’ve got to see these guys more than you see your wife and daughters and, I’m guessing from reading, that you spend even more time than that with Billy Maddox. Are you  that  mellow or do you guys bitch and fight a lot? Further to that, these guys are so fucking good. This Bill Hinds guy is about as gifted a guitarist as I can think of. Is the Tupelo/Memphis area a hotbed of musicians, or did you luck out?

A:    We get along great. Having our own private hotel rooms every night gives us time to ourselves which is important in any relationship. whether its a band or a marriage.

Q:    Is there a story behind  ‘Joanie, the Jehovah’s Witness Stripper’ or did that just come out of your brain as a wild imagining?

A:    Joanie was written about a real person I know who, after leaving home, supplemented her income by dancing topless on the weekends. Her family was all Jehovah's Witness. They never found out about her secret career.

Q:    My dad was a British A.B.A. (Golden Gloves) Bantamweight and Featherweight champion.  He had no punch, but you couldn’t lay a glove on him, so he was a champion amateur but useless as a pro. Boxing is a solitary game. You know, up at dawn doing road work. I remember  my dad chewing on steaks but never swallowing, and no pussy for weeks before a fight. How does that square with you, in that you seem to be a very social animal?

A:    I  disagree that you should abstain from sex for weeks before a fight. A couple days before the fight is plenty. Its hard to focus on training with a pole in your pants. This is boxing not fencing.


Q:     What did you think of the movie ‘The Fighter’? Ha! Do you have a favorite boxer? Mine was Wilfrédo Benítez. He danced away from Sugar Ray Leonard for 12 rounds before Sugar cornered him. Do you have any favorite boxers or particular fights?

A:      I have not seen ‘The Fighter’ but I am a huge Mickey Ward fan. he was a a great brawler with lots of heart.  I actually got to fight my favorite fighter. In 1988, I boxed Roberto Duran on national television. The fight was stopped after the 6th round due to cuts on my face. Everyone always talks about his punching power but, honestly, I was more impressed with his defensive skills. He was incredibly hard to hit. He made me miss a lot. As far as favorite fights goes, there are many I could name but the Hagler-Hearns scrap is one that comes to mind. It was what they call a war.


Q:     Who did you listen when you were a kid?  You know, there’s a white boy named Eddie Hinton who used to play for Otis Redding’s tour band and his songs on an album called ‘Very Extremely Dangerous’ are in the same  damnation/redemption vein as yours. What songwriters did you like as a kid?

A:      I grew up on church music. Holy roller hell fire hymn book songs really molded whatever musical mojo I have. As far as writers go, I like guys like Roger Miller, Tom Waits, and Kristofferson.

Q:    My Grandma, who brought me up, used to say “Count to ten before you throw a stone,” too. In a very general way, with that, “Whatever you believe, you might be wrong” message, you’re speaking for what the Obama man  calls “our good angels.” Thing is, in all the years I’ve been here since  1977, I’ve never seen us all so divided. Any comment?

A:     I am no longer a religous person. Exclusive clubs that say they possess the absolute truth seem arrogant to me. I dont believe that anyone knows whats on the other side of life. I do believe in a higher power, but I don't think he wants 10% of my income. Paying tithes is something man invented.

Q:      I  really admire how you’re making hay out of being independent. I’ve published two books with so-called legit publishers and had to stand by while my work got butchered by editors and agents. Both times their accounting meant I somehow owed them even after one book was reprinted four times. I’and saving my money to  publish a bunch of already published short stories and  poems, which I’ll need to take on the road.. Anyway, I don’t  know how good your finances are from doing  it yourself, but this do-it-yourself  ethic works for me. If a big label came to you now, would you rethink what you’re doing, or has the game changed too much already?

A:     Being on a major label is like being a competitive pit bull dog. they will keep feeding you as long as you are winning. When you start losing, they kill you. They are in it for the quick buck. They don't develop artists anymore. You either become an instant  star or you fade away. I believe winning fans one at a time is the only way to last in today's musical climate.   I have no interest in major labels. They also make you water down your art to please the masses, which has sadly made most main stream music bland.

I definitely recommend you all sample his work at You Tube or check out his personal website at http://www.paulthorn.com/  or friend him at Facebook. Available along with his new album ‘Pimps & Preachers’ and  a number of other superb albums is a superb concert DVD ‘So Far So Good Live!’ 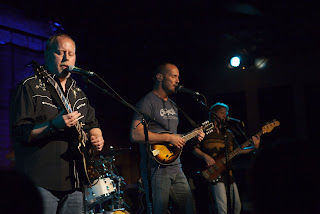