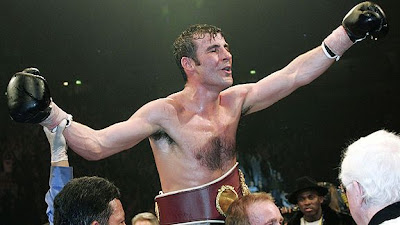 90 nights after trouncing 30-1 favourite, the self-described Mr. Phenomenon, Roy Jones, Jr., to remain undefeated over a glorious 46 professional fight career, Joe Calzaghe has announced his retirement. Without doubt the finest British boxer of his generation, Calzaghe can righteously claim to be the greatest British boxing champion of them all. Having plied his ruthless trade since 1993, the champ felt the time was right.

"It's been a difficult decision but I achieved everything I wanted to achieve in boxing," said the 36-year-old Calzaghe. "I've been a world champion for 11 years."

Looking at that magnificent Italian mug, the scar tissue around his eye sockets like two curled-up pink snakes, I can't help but think that his timing is immaculate. "I've seen too many great fighters have that one fight too many. I had a long think with my family. My children wanted me to give up, plus my mum, and that's why I called it a day and will go on to do something else.

All of the London reporters crew, including those tuned in on closed circuit from Cardiff, Vegas and New York, are all, I'm sure, feeling very relieved. Joe Calzaghe is a lovely man in a corrupt, ruthless business. He knits the fingers of both hands together and stares at his shoes.

"I've been boxing for 25 years. You can never say never in this game but I can't see myself boxing again." He winks at me. I nod back. Then he answers one of my questions, so I won't have to ask it. "There's loads of things I want to do. I'm proud to be one of the only few fighters in history to retire undefeated. There's always a temptation to fight on, especially if you are the champ and no one has ever beaten you. But I've come to the point where the satisfaction of retiring undefeated has to outweigh the thrill of another fight."

Trained by his father, Enzo, a quiet man who drove him in the gym with the kind of ruthless determination that only a close family might have dared to dish out, Joe always approached each upcoming fight with a genuine sense of monastic dedication. After Calzaghe became the WBO world super-middleweight champion in 1997, when he out pointed Chris Eubank. After that fight, Giuseppe and Enzo, father and son, sat for over an hour sipping Enzo's home-made cherry wine, discussing moves as if they'd just been in a chess match. This quirky little ceremony of theirs went on as Joe made 21 straight defenses. Reporters knew that, after a Calzaghe fight, there'd be a lull. Time enough have a beer and write some intro copy.

His victory over the hitherto undefeated American Jeff Lacy in March 2006 was hailed as career-defining. Lacy had been a 25-1 favourite, even with the London bookies, when Calzaghe took him to school. Still, Calzaghe insisted it was his points win over the Danish WBC and WBA champion Mikkel Kessler, in a brutal unification contest in front of 50,000 partisan Welsh fans at Cardiff's Millennium Stadium which was easily his greatest night. "Oh man, I was fighting a younger fighter than me, I was the underdog. A lot of people thought I was going to lose that fight," Calzaghe said.

A 'lot of people,' hunh? The whole boxing world, including yours truly, thought Joe was about to meet his Waterloo. Kessler had all the tools, but Enzo and Joe's game plan smothered him into neutrality. Staying inside Kessler, slipping punches and absorbing blows thrown without the kind of leverage that Kessler needed to get off, Calzaghe ultimately destroyed the Dane's will and overwhelmed with relentless accurate punching. It was a boxing masterpiece and Calzaghe was seen as a true artiste!

A year ago came payoff time. After being dodged for years by the durable Bernard Hopkins, Joe won big-money light heavyweight fights in the US against both Hopkins and Roy Jones, Jr. No, said the pundits, once again, feeling that fighting in Vegas was a bridge too far for a boxer so in tune with his fanatical bloc of fans in Cardiff and London. Both fighters, equally as long in tooth as Calzaghe, gambled on Giuseppe having lost his edge after taking on every young fighter they had each dodged at the behest of their promoter, Don King. 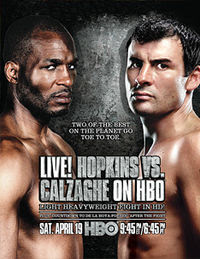 On April 19, 2008, accompanied by an army of singing Welshmen, Joe Calzaghe turned Las Vegas' Thomas & Mack stadium into Merthyr Tydfil for a night. After being stunned by a Hopkins combination in round one, with a choir of Welsh fanatics singing Sospen Fach at a deafening level of intensity, Calzaghe completely dominated his opponent and won a unanimous points victory.

Seventh months later, on November 8, Calzaghe fought Roy Jones, Jr. at the legendary Madison Square Garden in New York City. In the campaign leading up to the fight, Jones unloosed a barrage of braggadocio and racism. "I can't never go home to the projects if I lose to this white man," he said. "I'm gonna kill his ass." Promises! Promises! Jones knocked Calzaghe down in the first round, but that was his one and only moment of promise. Calzaghe took every round thereafter on each judge's card, winning a unanimous victory on points. This time I had known better than to speak ill of the Master and it came as no surprise at all that he dominated both of them.

"You've really got to know when enough is enough," he said as he left his last press conference as a champion.

Now Calzaghe has decided to walk away rather than risk his legacy against any more younger, undefeated fighters. Going the distance against the American light-heavyweight Chad Dawson, and the man who succeeded him as WBC super-middleweight champion, Nottingham's Carl Froch, would have been bloody and brutal, win or lose.

Joe's best mate, Richie Woodhall, the British former world super-middleweight champion put it to me this way: "There's not many fighters who realise it's over but Joe knows he's done his bit. In my opinion Joe is the greatest fighter to come out of Britain... Ever!"
Posted by Ivor Irwin at 11:18 AM
Labels: Boxing