My first subject is Jon Cotterill, an Englishman who lives in São Paulo, Brazil. His blog is absolutely fascinating, really friendly reading about football, rumors, etc. from an Anglo-Brazilian perspective. Check his work out at: pitacodogringo.wordpress.com

These days Brazil produces a never-ending supply of brilliant young players, and more and more of them seem to be headed for the English Premier League. Most of us know very little about Brazil. Into this informational void steps Jon Cotterill who describes himself on his site as a "Marmite eating, brown sauce guzzling, Jonny foreigner and his take on Brazilian football." A football commentator for TV Globo in São Paulo, Brazil, he is currently broadcasting two live Campeonato Brasileiroand Campeonato Paulista games per week plus a magazine show. If you own a satellite dish, you can watch him on Gol TVI. I interviewed him by emai. 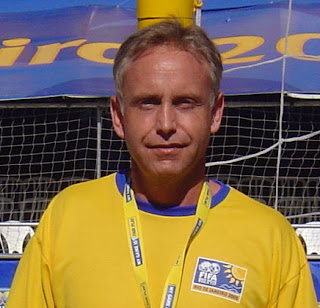 Ivor: So what’s the weather like over there right now? I’m still an Englishman abroad with bad Manc sinuses from the rain, and, when I visit my mother-in-law in El Paso and it gets to 105 F and the scorpions come out, I stay inside. What’s that like for you? The weather? The food? The street life? Football-wise I always think of our poor suffering little Ginger Scholes, dying in the heat against Vasco at the Maracana or at the W.C.in Japan. Do you do siesta-time?

Jon: It was baking just a few weeks ago with temperatures in the top 30s(90s Fahrenheit) but the weather is cooling down now as we’re heading towards winter. Today it was about 20 degrees, which, after almost eight years here in São Paulo, I now consider to be quite nippy.

Food-wise, the options are pretty good, especially if you like Italian, pizza, Chinese etc. Brazil’s also heaven for meat-eaters with some absolutely fabulous ‘carveries’ (churrascarias) where the service is first-rate and you can stuff yourself until you burst. My favourite is Fogo de Chão – they now have a few in the US but I don’t know how they compare.

The beer here is also excellent, cheap and chilled to perfection.

Two problems for me are the dearth of Indian restaurants. There are one or two here in SP but no take-aways. And I can’t buy Marmite anywhere, which is a major blow.

Ivor: Did you move to Brazil as a journalist or become one? The other Anglo journos there that I know of, Tim Vickery and Andy Mitten, tend to give the impression that they have the best job in the world. And, for me, of course, speaking as an outsider, it seems like the best gig in the world, too. A bit of autobiographical info might be nice here.

Jon: My background is in teaching. I studied media at the university and have a Masters in Film and TV, but i’m not a journalist as such. I’m a football commentator first and foremost. This includes live games and doing voice-overs for our weekly magazine show, FootBrazil. As far as that goes, there couldn’t be a better job. However, even after seven years, crap games, constant diving and ridiculous refereeing decisions continue to annoy me and I think that comes across sometimes.

I suppose I’m slowly moving into journalism with the blog, the occasional bit for Sky Sports and other sites, and I’m quite happy to do this.

Ivor: How is it that a fairly large percentage of Brazilian players who go to Europe fail? Could it be down to naïve youth and homesickness? Is it sometimes a racial issue? Could it be that Brazilian kids are still such a relative bargain for ambitious agents and scouts looking to feed at the trough along with the players and clubs, that sometimes they’re collectively scraping the bottom of the barrel?

Jon: I suppose part of what you said comes in to it. I would also say that a lot of players never have any real intention of sticking it out abroad. The idea for many is to make a quick buck and then get a loan deal back to Brazil. Some simply don’t like the more professional approach required of them in Europe and prefer it here in Brazil, were things can be a little slacker discipline-wise.

Another problem is that the European clubs don’t do their homework on the players. Werder Bremen were stupid to have paid around €8 million for Carlos Alberto (now loaned to Vasco) with his track record. His excuse for his difficulties in Germany was that he couldn’t adjust to the time-difference–-conveniently forgetting his spell with Porto.

Ivor: I’ve had my kid playing with the little ball since he was 3/4 years-old. It has definitely paid off. Do you think Brazilian coaching for kids is actually better; or, do you see it as simply the result of a sheer huge volume of kids who are actually playing the game 24/7/365?

Jon: I can’t really answer the coaching question with any authority, but I doubt they’re that much better than their European counterparts. I’ve played with lots of Brazilians many times and one of the main differences I noticed was the amount of ball-hogging that goes on. People would rather try to dribble past two or three opponents, instead of making the smart pass. The game is certainly more individual, sort of in spite of the collective but somehow it works. Maybe it’s because the idea of futebol arte ( the beautiful game) still lingers. But that style of football has long since been killed off in the Brazilian leagues. And Brazil's national team under Dunga are a million miles away from anything like futebol arte.

The smaller ball thing is partly because of Futsal (indoor football). There are televised games here and some big stars. The ball is smaller and has less bounce. Some former Futsal players such as Robinho, made the switch to the normal game when they were young and went on to be a success. Others such as Falcão, who is a magician on the Futsal court, failed miserably when they tried to play for a regular league club.

Ivor: I think that, golden handshake aside, Scolari was very badly treated by Chelsea. Kenyon and Arnesen spoke of his supposed lack of club experience, but, it seems to me that he had already been the ‘Special One’ at Gremio and Palmeiras before he took over Brazil’s national team. I believe Brazilian club coaches tend to be very underrated. Some critics and so-called experts act as if all Brazilian footballers are spat out from their mother’s wombs, instantaneously endowed with talent.. any opinions on that?

Jon: I’d say fluency in English (or another second language) is one reason why Brazil doesn’t export that many coaches in relation to the 1000s of players who move away. Felipão certainly had a problem with the lingo, but I think his ‘father Phil/Felipão family’ thing didn’t go down well with many players at Chelsea. It worked in Brazil and Portugal, but the two cultures are more family-orientated - or at least pay lip-service to the idea that the family is the centre of everything.

Scolari remains hugely popular in Brazil but I was never a huge fan and always thought he was over-rated. The one thing I do like about him, though, is that he is apparently a Nottingham Forest fan.

Q: You're from Nottingham? A Forest fan, right?

A: I'm from Nottingham and used to stand in the Trent End in my youth.

Q: Have you read David Peace's novel 'The Damned United' about Brian Clough's time at Leeds United before he signed for Forest. It's a fantastic piece of work.

A: I've read the book and know about the movie - but it sounds like it's been turned into one of those lightweight 'Britcom' jobs.

Q: I’m sure you know about  the Iranian hustler, Kia Joorabchian, his Russian mobster friends and the circus involved in the ownership in Tevez and Mascharano at Corinthians, West Ham United and now Manny U. Does this kind of ‘investment’ in young players happen a little or a lot?

A: It’s very common for groups of investors to buy players or own part of a player’s contract. Traffic Sports Management have a piece of all the top players at Palmeiras. Santos’ Neymar is part-owned by Grupo Sonda. As far as I’m aware, São Paulo are one of the few clubs that don’t buy athletes owned by investment groups and they’ve won the league for the past three seasons. Traffic seem legit - the question is whether the idea of companies buying players is good for the game or not. Traffic are very business-like. Their only interest is acquiring players and selling them on for a quick and often very large profit. What I don't get is why a club would sell to Traffic instead of dealing directly with other teams. I think Traffic argue they can raise the profile of the player and then get a better return.

Ivor: Do you do other stuff outside football to make a living? How is it with family over in Brazil? Could you ever live in England again? Me?Never!

Jon: I think I could live in England again. I still have a flat in Brighton. I lived there for about 15 years and loved the place. But the last time I was there, the city had really gone down hill and I’m not sure I’d want to live there again.

I doubt I’d return without a job already lined up though.

I enjoy a better standard of living here than I did in the UK and live in a pretty nice area. But only last week there was a bank robbery near my house. The police chased the robbers and three stray bullets hit my neighbour’s houses. Strangely, this didn’t bother me too much. It’s not a common occurrence where I live, but the news is full of shootings, kidnappings etc so perhaps I’ve become a little blasé about it all (though I don’t want to give the impression I’m living in a war-zone, as it’s not like that). However, I’ve got a baby daughter who’ll turn one this month. So, if I begin to feel it’s getting a bit hairy for her, I’ll hope on a flight back to England.
Posted by Ivor Irwin at 8:34 AM
Labels: Questions and Answers

Earning money online never been this easy and transparent. You would find great tips on how to make that dream amount every month. So go ahead and click here for more details and open floodgates to your online income. All the best.

Earning money online never been this easy and transparent. You would find great tips on how to make that dream amount every month. So go ahead and click here for more details and open floodgates to your online income. All the best.