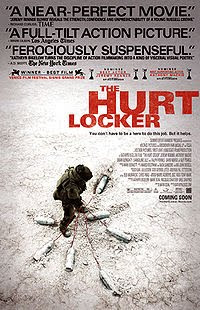 The closest I can describe the feeling after seeing The Hurt Locker is “Shaken Baby Syndrome.” My world got rocked a bit. I am not naïve. I’ve seen my share of war movies and had a father and a father-in-law who, between them fought in four wars. The visceral shocks in The Hurt Locker, however, are shocks of recognition, Kathryn Bigelow's stunning film about a bomb squad in Iraq will leave you exhausted. This truly is high art in its most populist form.

There’s nothing aesthetically new here, per sé. A low-budget Vietnam film called ‘3-Charlie-Mopic’ covered the same ground first. Bigelow’s originality here lies in a unique kind of observational action moviemaking. Every new take yanks you into a kind of POV reconnaissance. The camera sensitizes you to changes in atmosphere. Objects are fixed upon, piles of garbage, bombed-out cars, gore-covered, apron-wearing butchers smoking during their lunch break, The mundane becomes a kind of metaphorical gargoyle. Bigelow fixes on each moment for a long time as a portent of lethal danger, all the while giving us a fixed sense of the paranoia and fear which dog the observer. Character is fate, according to Chekhov, but could that rusty pair of old paint cans really be a bomb? Every long, and sometimes tedious, shot hints at some hidden meaning while furthering our sense of refined character and plot. While the Second World War and Vietnam were very clearly reported, our sense of the young men and women in Iraq is murky at best because the government and military have stage-managed the choreography of this war so well from the sidelines. Somehow, Bigelow manages to flesh out the character of soldiers we know absolutely nothing about, yet makes them completely convincing.

Whether they’re defusing a bomb on a sandbagged Green Zone street in Baghdad, getting drunk at their Camp Victory base, buying a DVD off a bootlegger on the street or talking down a taxi driver who may or may not be a Jihadi, every single act seems to carry consequences for these men. They are caught in a vortex of imminent danger where every act may have a mortal aftermath. Something as insignificant as the sight of Iraqi adults appearing on top of a minaret staring in their direction, or in a window, could mean they’re bombers. Are they about to detonate a bomb or just curious: watching? What is that man with a camera doing? Clearly the best bet for safety would be to simply blow them away. The rules of engagement do not allow for this, of course, but this film helps us understand how such desperate acts end up happening in a way that no war movie I've ever seen before have done.
The screenwriter, Mark Boal, keeps it simple. Three men in a bomb unit are counting the 38 days to the end of their Baghdad rotation after their leader gets killed by a mistake. Day by day they engage in a war with a crafty group of bomb-makers and their lethal devices. To say they’re ‘stressed’ is the understatement of all time. Yet, in incident following incident, they improvise new ways to adapt their individual eccentricities to their awkward, emotionally spastic but ultimately lukewarm group chemistry. Boal, formerly a freelance investigative reporter for the likes of Playboy, the Village Voice and Harper's, seems to have entered the screenwriting profession as a means of no longer allowing other writer/directors the opportunity to mutilate his work, as was the case with the writer/director Paul Haggis, who took one of Boal's Playboy articles and turned it into In the Valley of Elah (2005). Boal, who produced this film along with the director, Katherine Bigelow, seems to have learned everything he needed to know from Haggis' complex failure. There is nothing extraneous in this movie. No fat. His screenplay is first-time perfection.

Sergeant J.T. Sanborn is superbly played by Anthony Mackie as a kind of lean and hungry macho lion-tamer. In a relative sense, especially in dealings with people from other squads, he is an island of sanity. Sanborn's leadership skills are a smorgasbord of hood rat wisdom, the dark results of time spent working in military intelligence and the lethal street reflexes honed in any number of fire fights. His motherly vigilance and ra-ra pep talks are the slender thread which keep the ultra-sensitive and doggedly naïve Spec. Owen Eldridge (Brian Geraghty) from jumping off the precipice of a cliff. These two welcome Sgt. William James (Jeremy Renner), but quickly realize that he is both brilliant and suicidally reckless in equal parts. James views the world in the myopic manner of a very hungry fat man at a buffet. It is his buffet and he does not share.

Sanborn and Eldridge are the carefully trained auxiliary eyes and ears for bomb disposal experts who don protective suits and defuse IEDs (improvised explosive devices). Protocol is King in the military. From the get-go, however, James rejects both their practical support and camaraderie. Indeed, James goes to war with every bomb he goes up against. It’s a kind of lone wolf, single-warrior combat that Sanborn and Eldrige just can’t deal with or share in. Indeed the sharing of information is an anathema to James. Military etiquette is simply ignored. There is no need-to-know basis when you are the one who dismantles the IEDs. Rules and procedures are meaningless to James. Consequently, Sanborn and Eldridge find themselves handcuffed into a state of complete dependance on James and his foibles.

This, umm, explosive scenario makes for a strong viewer connection to the daily chaos these men face in Iraq. It's impossible not to identify with Sanborn's obvious doubts about his stated gift for leadership. Between Eldridge's permanent state of panic and James' relentless fervor for hand-to-hand combat with the fiendish machinations of the bomb makers, Sanborne's attempts to assert leadership and maintain camaraderie are like a lame attempt to fix a crack in a dam with a roll of Scotch tape. Conflict piles on conflict. The POV camera is everywhere, mutely recording the utter terror of war via every shift in movement and sound.

Renner's performance as James goes beyond someone very tightly wound. He is not some mere bomb disposal addict with a death wish. James is an egocentric artist dedicated to his craft. After dismantling one particularly complex set of carefully disguised booby-trapped devices, James' unstated, beaming sense of pleasure shines through his skin so that he's like some beatified saint in a mediaeval painting. He has touched greatness in his specialized vocation and the other members of his squad, mere mortals, can never understand or share his glory. Atypically, James keeps a box under his mattress filled with a diverse collection of triggers and tripping devices for bombs that he's conquered. These hellish chatchkes are mementos, like a box of smelly unwashed underwear belonging to scores of old sexual conquests. That he is also capable of a surprising sentimentality toward both his fellow soldiers and a sad-eyed Iraqi boy who loves soccer and sells bootleg DVDs is not so much surprising as darkly comic. These contradictions shock Sanborn into a kind of suppressed muteness until the built-up bile is allowed to escape after a night of drunken debauchery ends in James and Sanborn punching each other into a kind of vicious truce.

For two committed warriors like James and Sanborn, it's clear that life will never be the same again. We are left in no doubt that neither the traditional longing for the pull of family, nor any other kind of work will come close to the thrill and fear of combat and bomb disposal these men have encountered. Atypically, toward the end, in a brief supermarket scene, James, home from the war, wanders the aisles, dragging slowly behind his wife and son. Through James' tragically heroic POV, we see boxes of cereal and carefully stacked cans and jars as objects of threat. Random objects are dangerous in his eye. As if any one of them might be an IED, too.

In The Hurt Locker, Katherine Bigelow has create a shockingly complex, yet muscular and spare war movie. A prismatic voyeur's view of men in combat, rendered even more gainfully enigmatic by the Summer heat of Baghdad. Bigelow, who began her career as a painter, is picky about her projects. Having made only nine films over a 26 year period, her technique demands long takes, commitment from her actors and an obsession with character-driven storytelling Pegged by critics as a director of fairly successful 'action' films, Bigelow has long run underrated below Hollywood's hack radar and, for a change, gender has never been an issue. They are indeed action movies but Near Dark (1987), Blue Steel(1990), Point Break (2001) and Strange Days (1995), all work hard at offering motivation for their characters' indulgence in acts of homicidal mayhem. Near Dark is too talky for some, but it's my favorite vampire flick ever. In her collaboration with Mark Boal, Bigelow finally seems to have found a partner worthy of her gift for getting ratcheted up performances from her cast. Bigelow's multifaceted vision ruthlessly yanks us into a nightmare world, but without ever intruding enough to try to transpose us into their insane points of view.

I've talked lot about Bigelow's eccentric vistas through her obsession with the minutae of garbage and wire. Halfway through the movie, however, Bigelow exercises a little sleight of hand. There's a desert gun battle, right up there in the heart-racing excitement stakes with the shoot-out that follows the bank robbery in Michael Mann's Heat (1995). It's a balls-out duel in the desert outside Baghdad between insurgents and members of the bomb squad after their patrol accidentally stumbles into an assassination squad of British SAS men just as they get trapped in an ambush. It's just a coincidence. A moment of fated bad luck. As sniper bullets fell this group of elite killers one by one, we get a shocking take on just how it feels for soldiers to be pinned down in wide open spaces. It is the only time in the movie where we actually clearly see the enemy. There's a bonding for the survivors at the end of the short action, but we realize this will all instantaneously dissipate once the bomb squad returns to its routine. The Hurt Locker is extraordinary. 130 minutes, but the time goes by fast! See it!
Posted by Ivor Irwin at 5:07 PM
Labels: Film Reviews

I'm with you 100% on this one Ivor. Saw this a couple of weeks back and just left the theater breathless. I especially agree with your take that Renner's character is an artist, and meant to be understood as such. Part of what makes the movie so refreshing is that he gets to be heroic and a complete prick simultaneously and that Mackie and Geraghty are allowed to be wowed and supremely pissed at him too. It seems silly to say, but watching this movie made me realize how few complex characters there actually are in movie (and "films"). And how there are even fewer complex soldiers on the screen, ever.

My only qualm was that last bit toward the end, when they get into a bit of a conventional plot arc when Geraghty gets in trouble and the others have to chase after him. It fit with their characters, just didn't think the movie even needed it. But that last shot, with Renner walking into the sunset/tempest really just knocked me on my ass.